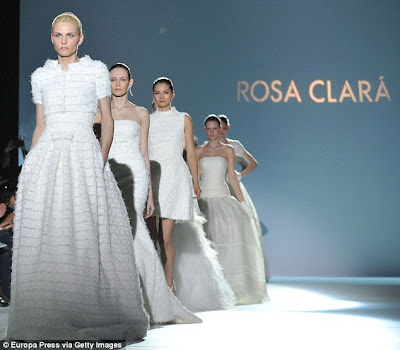 Andrej Pejic has broke barriers worldwide as he opened Rosa Clara's bridal show in Barcelona recently. Though Andrej Pejic is not the first androgynous face we've seen in past years, he certainly is the most sought after. Pejic is considered as a male and female model. In seasons gone by the 20-year-old has modelled for designers such as Marc Jacobs and most famously Jean Paul Gaultier, modelling his couture collection. Although Pejic has undergone a certain amount of stigma for his cross gender modelling career and sexuality, nothing has stopped him yet.

Pejic was born in Yugoslavia in 1991 to a Bosnian mother and father, and was was scouted at the age of 17 whilst working at McDonalds. Though Pejic also models male clothing, he claims he keeps his waist to a woman's size for modelling womenswear. Pejic has also been placed in the top 50 male models on model platform models.com

Voted one of the most compelling people of 2011 by gay and lesbian publication 'Out', there's no doubt we'll be seeing more of him in 2012.
Posted by Diversity In Fashion at 17:54

Diversity In Fashion
A group of fashion journalism students at UCA Epsom campaining for diversity in fashion.